March is here- let the madness begin! College basketball takes the main stage, MLB clubs are in spring training, NASCAR is back, the NFL never went away... enough to keep sports business fans busy. Here are six stories worth another look:

Michael Jordan Still Dominates the Basketball Shoe Market and Nobody Else is Even Close, by Cork Gaines, Business Insider

Michael Jordan is as dominant as ever on the basketball court even though his playing days have long since passed. Jordan branded shoes generated $2.5 billion in sales in 2013, more than four times the sales of the next four endorsers (LeBron James, Kevin Durant, Kobe Bryant, and Derrick Rose) combined. These eye-popping numbers raise two questions: 1) Why does Michael Jordan's brand still resonate with consumers? 2) It is assumed that LeBron James is the heir to Air Jordan, but do sales of his shoes compared with Jordan suggest that he does not have star power like Jordan's?

2. Time is of the Essence for Sports Fans

In a world of second and third screens vying for our attention, a premium is placed on the time devoted to any consumption experience. Sporting events are no exception. In fact, slow pace of play in golf, tennis,and baseball is cited as a reason why those sports have had challenges sustaining fan interest. As one sports marketer puts it, consumers experience the greatest value when the ball is in play. Is it imperative for sporting events to speed up pace of play and reduce the time of no action? NFL and college football games are taking longer to play but have not experienced declines in viewer interest. Is speeding up pace of play important in delivering a better fan experience, or is its effect overestimated?

Every Second Counts in Bid to Keep Sports Fans, by Christopher Clarey, The New York Times

3. Building a Commercial District around Sports

Funding of new sports venues is a sore subject. Many economists argue that public funds should not be used to build stadiums as costs far exceed any economic benefits realized. Of course, sports franchise owners wanting new stadiums tout the positive impact on employment, consumer spending, and quality of life in the community. Which side is right? A stronger case for the position of team owners is being made when they pitch the idea of mixed-use development. Rather than building a stand-alone stadium or arena, mixed-use developments incorporate retail, restaurant, and entertainment businesses that can attract customers year-round. The latest example of such a strategy is the Jacksonville Jaguars. Team owner Shad Khan has a vision for a dramatic transformation of the Shipyards area adjacent to EverBank Field. Khan's vision is refreshing because it goes beyond the hollow economic impact proclamations that are standard among owners begging for public funds to build new venues.

One of the most valuable TV sports properties in the United States is the NCAA basketball tournament. March Madness is reality TV at its finest- drama, unlikely heroes, and breathtaking performances. The NCAA and CBS Sports has responded to consumers' appetite for digital consumption, streaming games online and on mobile devices. Now, the NCAA and another media partner, Turner, have created a YouTube channel. While viewers will still need to be a paying TV subscriber to get full games, the YouTube channel will serve up highlights and other related content. And, sponsors are getting in on the game with branded content. This alliance has the potential to fuel fan interest in the tournament, not substitute for viewing games.

Social media and sports are a natural match. Fans flock to social networking sites to connect with their favorite leagues, teams, and athletes. Sports properties use social media for engagement and to extend fans' involvement with their brands. Well, most sports properties do that, with Formula 1 being an exception. F1's top executive, Bernie Ecclestone, dismisses social media, saying it "doesn't make any money for a start." He questions the value of social networking sites, and if he is expecting them to solely make money he is right to blow off social media. However, applying that thinking to all marketing tactics would have disastrous results on brand building. If Ecclestone and F1 is interested in building the next generation of fans, social media must occupy a place in the brand's marketing strategy. The exposure some F1 teams have garnered on YouTube and Twitter should serve as evidence that fans crave the opportunity to connect with F1 digitally.

F1 Boss Says Twitter Does Nothing for Sports as Teams Have Success Engaging Fans, by Jeff Pappone, The Globe and Mail

6. Show Me the (Sponsorship) Money

In contrast to the view of social media taken by F1, the Minnesota Wild have embraced the possibilities of social media, and they should tell Bernie Ecclestone that they did make money via social channels. The club estimates revenue gains of 15 to 20 percent from its digital assets. The goal is simple: Extend reach and engagement beyond the venue. Digital marketing inventory has been created that marketers have parlayed into significant levels of brand impressions and engagement. Properties that collaborate with sponsors on digital marketing initiatives can create new revenue streams for themselves and new sources of value for their corporate partners.

Photo of the Week:

Speaking of the Minnesota Wild, the club made one of the most publicized acquisitions before the NHL trade deadline on March 2nd, and an 11-year-old girl may have been an inspiration for the trade. The girl was Jordyn Leopold, daughter of Columbus Blue Jackets defenseman Jordan Leopold. A letter written by Jordyn Leopold addressed to Minnesota Wild coaches suggested the team trade for her father. Why? She said her father was very lonely without his family. Her letter suggested that the Wild was not doing well and might could use more D-men.

Although the letter was never sent to the Wild, a local radio station received a picture of her letter. It spread quickly and the Wild apparently got the message. Sports fans often forget that athletes have families and make sacrifices to play the sport they love. This story had a happy ending- what a sweet letter! 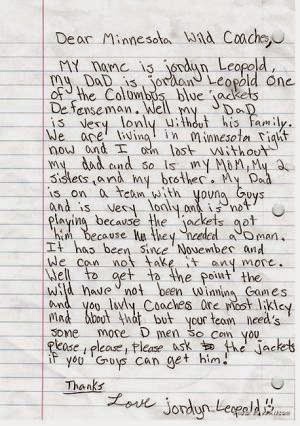