Does College Football Have an Attendance Problem? 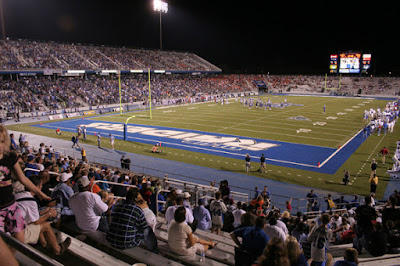 The pageantry of college football makes it one of the most compelling sports to attend in person in the United States. Tailgate parties, marching bands, cheerleaders, and more are staples of game day atmosphere on campuses across the country. The experience of attending a college football game sets the sport apart from other collegiate sports as well as its professional counterparts. College football has one other unmistakable trait associated with it: Declining attendance.

Attendance figures compiled by the NCAA reveal a slow but steady decline in average game attendance. The average number of fans taking in a game at the Football Bowl Subdivision (FBS) level has decreased 6.4 percent over the past decade, with the average of 43,288 fans being just under 3,000 fewer fans than on average ten years ago. Many sport properties that saw attendance declines in the wake of the 2008 economic recession would cite the economy as a reason for such a drop. However, a review of annual attendance figures suggests a gradual drop not caused by a single external factor like the economy. 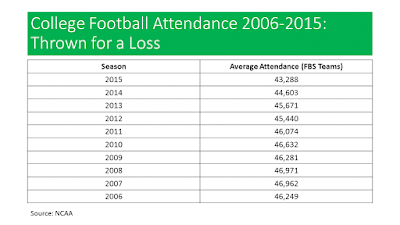 Attendance figures show fewer fans showing up for football games. However, the question begging for an answer is "why." Unfortunately, the answer is a complex one.


Known as the Theory of Personal Investment, the model suggests that attendees are motivated by different factors. Some attendees are influenced most by the sport or team, which might be an obvious influence. But, there are other attendees who may have less interest in the teams playing than in the chance to spend a few hours having fun with family or friends. Also, a person may make the decision not to attend at all, particularly if indirect consumption is an option, especially watching an event on television. There are no lines for food or restrooms, it is climate controlled, and inconveniences like parking and traffic are nonexistent.

What are your thoughts about attendance trends in college football. Interest in the sport remains strong, so is it only a matter of time before attendance increases? Or, is the gradual decline in average attendance over the past decade the new normal in college football, with perhaps more years of decline in store? Moreover, what can sports marketers do to entice people to return to stadiums on Saturdays using marketing incentives?