MiLB's #Foodfight is not Child's Play

If we are to believe depictions of adolescence shown to us by the entertainment industry, food fights are a must-have experience. Grade school, high school, and even college students are supposed to sling food at each other at some point as if it is part of the education process. Personally, I like food too much to throw it! And, Minor League Baseball also appreciates food too much to relegate it a "Get Messy Night" promotion. MiLB took to social media to celebrate the culinary delights found at ballparks across the country and help clubs with their marketing efforts to bring more people to games (and to eat!).

A Strategic #Foodfight
From May 15 through June 6, MiLB conducted a #foodfight campaign on Twitter. To participate, the first step was to follow Minor League Baseball on Twitter. Then, people tweeted their menu item of choice from a list of 64 nominees in four categories: Gut Busters, Hogs 'N' Dogs, Local Legends, and Scrumptious Sandwiches. The first two weeks of the campaign was used narrow the field of 64 down to the top choice in each category. The four category winners competed in the last week of the contest:


While the contest was effective for stirring interest of fans who voted for their favorite ballpark food, the promotion had marketing value for MiLB teams that could benefit them long after people remember the voting results. MiLB was able to collect data (names and email addresses) on voters. Data were shared with clubs. In the short run, some clubs sent emails to people voting for them that offered discounts. In the long run, teams will be able to mine data collected on #foodfight voters to target in future marketing campaigns.

Social Media is not a Strategy
MiLB is to be commended for its creative use of social media to add followers to its own Twitter presence and engage fans of the teams represented in #foodfight. But, more importantly, MiLB recognizes that social media is a channel, a means to an end that is one of an array of tools sports marketers have available to attain business objectives like increased attendance, higher per cap spending, and a larger brand community. Marketing expert Gini Dietrich recently wrote "there is no such thing as a social media strategy. That’s akin to saying you have a telephone strategy or a typewriter strategy." It is tempting to think about social media as a stand alone endeavor, but it should not be managed and executed that way. MiLB's promotion shows how you can achieve both social media impact and marketing benefits.

And the Winner Is...
In case all of this food talk is getting to you or if you are simply curious about which entry won the MiLB Food Fight, here you go: 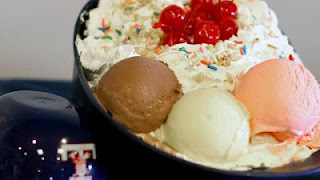 It is the Fantastic Freeze Sundae offered by the Toledo Mud Hens. How does something as simple as ice cream top 63 other entries? When it is a 15-scoop creation served in a regulation-size batting helmet! And, it helps that the Mud Hens have the largest social media following in Minor League Baseball. The team tapped its community through its social media accounts, website, email, broadcasts, and in-game messaging to enlist fans to vote.