A Club of Their Own: NFL Teams Target the Female Market 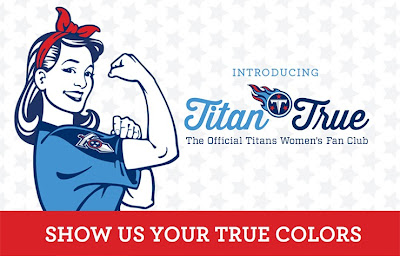 How do you grow a business? The answer is not too complicated- you attract more customers, sell more products, or pursue a combination of the two approaches. This formula is remarkably applicable across a wide range of industries and product categories, including professional sports. Pro sport properties are using a variety of strategies to create new revenue such as:

But, pursuing growth need not be as bold and risky as joint ventures into new product markets. Another growth strategy is to intensify efforts to appeal to a new market segment. A geographic area or demographic segment are examples of ways to grow via new market expansion. It is the latter option that some NFL teams are pursuing to grow its fan base.

Women's Fan Clubs
The new market strategy adopted by a few NFL teams has been to build customer relationships among female fans. Official team fan clubs exclusively for women have been formed to create unique experiences for an often overlooked market segment. The Tennessee Titans were the latest team to offer a fan club for women when it recently launched Titan True. Membership benefits in Titan True include:
The Titans are among only of eight of the NFL's 32 teams that have established official fan clubs for women. According to an article on the blog Guysgirl.com posted in April of this year, the other seven teams have women's fan clubs include:
In other words, three-fourths of NFL teams have opted not to create an exclusive club for women as part of a broader strategy to strengthen relationships with their female fans. Of course, a women's fan club is not the only tactic for targeting female fans, so it would be unfair to say the other 24 clubs are not targeting women. But, it appears that a strategy to expand their footprint among females is not a priority.
Think Outside the Tackle Box
Forming women's fan clubs is a signal sent by the eight NFL teams that female fans are important to them. The implications of building and strengthening relationships among women goes beyond increasing fan base headcount. Women are highly influential in making household purchase decisions as well as their own entertainment consumption decisions. Thus, rather than being "football widows," NFL teams targeting women seek to include them in the community of fans.

Another aspect of women's fan clubs is their potential to create revenue. For example, Titan True membership is $100. The membership fee itself will not be a game changer for any organization, but building more involvement among club members could escalate their consumption in the form of ticket purchases, licensed merchandise purchases, and loyalty to team sponsors. Whether it is a women's fan club, kids' club, or some other program to appeal to a specific customer segment, sport properties should be constantly on the lookout for products or experiences to create relevance among market segments previously neglected or underserved.
Posted by Don Roy at 10:00 AM