Does Year-Round Marketing of Sports Create Followers or Choosers? 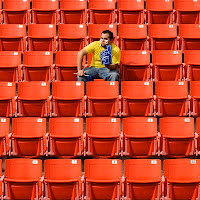 The marketing of sports has transformed games from seasonal pursuits to year-round businesses. The concept of off-season is now limited to competition on the field. Off the field, fans, media, and sports marketers do their best to ensure the action does not end on the last day of the season. Entry drafts, free agency, training camps, and player trades are four examples of made for TV (plus social media, blogs, and discussion forums) content that keeps a sport relevant even when games are not being played.

As a sports fan, is there anything better than having the season extended so that you can consume information and entertainment whenever you want? The answer depends who you ask. An article by Jason Gay on WSJ.com raises the question "Do fans need an off-season?" This question was a non-issue in the past; fans got an off-season whether they wanted it or not. Today, we are constantly connected to the sports and teams we love. For highly involved fans, keeping abreast of personnel changes, scouting reports, and other news is more like work than leisure. Jason Gay quips "Sports are no longer hobbies. They've become graduate school."

Creating Followers
Fans are encouraged to keep their consumption and following of sports ongoing, not bound by game schedules. Digital media gives sports properties and media unprecedented opportunities to re-frame their brands from seasonal offerings to year-round products. For consumers, there are benefits to marketing a sport or team year round:


In short, the task of marketing a seasonal sports product is made easier when it is managed as a brand for which interest never goes away.

Creating Choosers
Positioning a seasonal sports product as a year-round brand and then designing events or sub-brands to support it is savvy marketing. But, does this practice create an unintended consequence of forcing people to choose how they allocate their limited time and attention? This issue did not really exist prior to sports being positioned as a year-round offering. When baseball season ended, many sports fans would shift attention to football. After that, basketball and hockey might draw more interest. Then, as those seasons concluded baseball began a new season... and a new cycle of sports fandom would begin.

Now, fans that become highly involved with one sport or team might do so at the expense of other sports interests held previously. Jason Gay equates this dilemma to what he calls the specialization of youth sports. Players at a young age often are forced or feel compelled to pick one sport and focus on it. I can attest to this phenomenon. My 13-year-old began playing travel hockey at age 9. Tryouts, practices, season, spring camp, and summer camp means that virtually all of the calendar year is taken by one sport. Ethan has chosen hockey; in the process he gave up playing baseball and does not entertain the possibility of playing another sport because it will take away from his investment in hockey (his choice as much as it has been mine). As a result, he has lost touch with MLB, which he followed while playing baseball, and he has little more than casual interests in other sports because he is a "hockey guy."

It's about Market Segmentation
Going back to Jason Gay's question- Do sports fans need an off-season? The answer is no... and yes. Highly involved fans have little desire for a break- their self-identity is intertwined with a particular sport or team. Thus, being able to be a fan year round is more than a hobby, it is a means of maintaining self-harmony. Other fans have less invested in their sports relationships and will divert their leisure and entertainment interests during the off-season. Keeping fans engaged makes sense, but how can it be done in the most beneficial way for the brand? For high involvement fans, a product of which games is only one element transforms a seasonal product into a year-round one. Marketing to low involvement fans should occur year round, too, but the approach should differ. The off-season is a time to build a sports brand's presence in the local community- sponsoring arts and cultural events and engaging in strategic philanthropy (e.g., sponsoring an elementary school or local park) are two ways a team or other sports property can maintain relevance among people who may not be into mock drafts, mini camps, and the off-season rumor mill.

Segment the market when devising strategies to market after the lights have been turned off for the season. People have different levels of connection and interest with a sports brand; off-season marketing efforts should be undertaken with those different relationship states in mind.