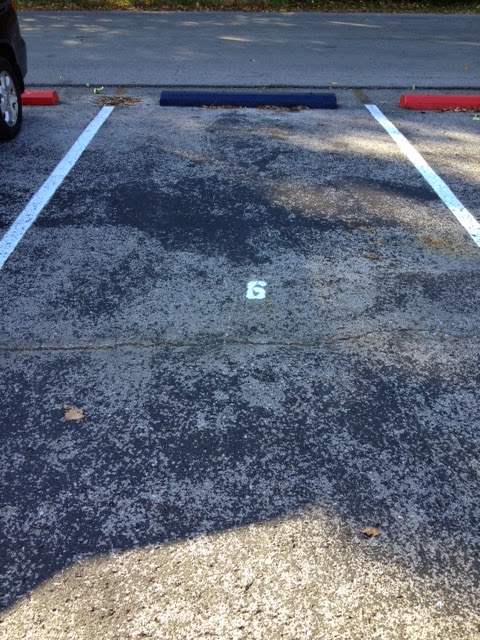 Here is your reserved space for six links to interesting happenings in sports business.

Activation is the "fuel" that brings a sponsorship to life, capturing the attention of an audience in ways that signage alone cannot. The Toronto Maple Leafs teamed with Gillette's Right Guard brand to incorporate a replica Right Guard package on the back of a Zamboni. The NHL initially rejected the planned activation but later relented. Creativity is one of the few limitations of activation, and Right Guard's Zamboni "attachment" is further proof of that notion.

2. Can Wearable Technology Use Sponsorship to Speed Adoption?

Wearable technology is predicted to take off... the question is when will consumers embrace wearables on a large scale. In the market for fitness-related wearables, one strategy for speeding adoption is to associate wearable technology products with athletes via sponsorship. Wearable technology brands including Fitbit and Jawbone are sponsoring sports and music properties to show how their products are used by athletes and musicians to maintain peak physical performance. Is this approach more effective than traditional brand messaging that focuses on features/benefits and persuasive selling?

The latest case of foot-in-mouth disease (of  foot-on-keyboard) to hit sports cost PGA of America president Ted Bishop his job. Bishop decided to take to social media to criticize golfer Ian Poulter, referring to him as a "lil girl." Reaction by the PGA of America board was swift, removing Bishop from his position one month before his term was set to expire. From a public relations standpoint, did the PGA have no choice but to dismiss Bishop? Or, were the other ways Bishop's social media missteps could have been dealt with to protect the PGA brand?

Your initial reaction to the news that a new college football bowl game will debut in 2015 may be "just what we need, another bowl game... NOT." But, this new bowl comes with a unique value proposition. The AutoNation Cure Bowl, pitting teams from the American Athletic Conference and Sun Belt Conference, will be held in Orlando. As the bowl name suggests, the game will raise funds for a cause, specifically the Breast Cancer Research Foundation. Projected fundraising from the bowl is expected to hit $1 million over a three-year period. The AutoNation Cure Bowl is not the only college football bowl game that supports causes or charities, but it potentially stands out as existing in order to do so. Would a cause or philanthropic positioning enhance the relevance of other bowl games that are mired in also-ran status?

AutoNation to be Title Sponsor of New Bowl Game in 2015, by Amy Wilson, Ad Age

5. Under Armour Looming as a Threat to Nike?

At first glance, it may be almost laughable that a company one-ninth the size of Nike in revenues should be perceived as a threat. But, when that company is Under Armour, should Nike be concerned? Under Armour reported a 22% increase in net income in the third quarter, and it anticipates 20% growth next year, too. Does Under Armour have the ability to disrupt the athletic apparel and footwear categories (more than it has already), or is it destined to be a niche player?

Under Armour is Becoming a Viable Threat to Nike, by Hayley Peterson, Business Insider

Yes, the NBA Development League still exists. In fact, it may be stronger than ever. Today, the 18-team D-League has situated itself in markets that are basketball hotbeds or in markets relatively close to NBA markets. In addition to be a proving ground for prospective NBA players, the D-League has been a laboratory for the NBA to test concepts such as jersey sponsorships. Its evolution has raised the D-League's profile as legitimate sports entertainment property.Is the D-League right-sized in its current makeup, or should further market growth be in the plans?

Picture of the Week 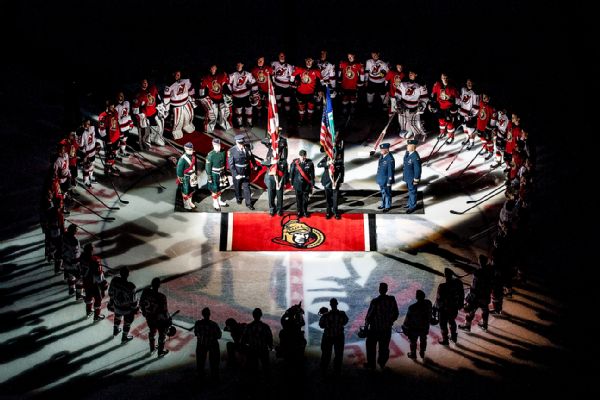 Sports is a form of "social glue." It has a unique property of giving people a common bond around which to rally during times of adversity. The latest example of this characteristic of sports played out last week following the tragic shootings in Ottawa on Parliament Hill. At the first home game following the shootings, the Ottawa Senators and New Jersey Devils broke from the custom of starting players lining up on opposing blue lines for the national anthems. Instead, all players formed a circle at center ice, Ottawa and New Jersey players literally side-by-side, to show their support for something far more significant than anything that would happen on the ice at Canadian Tire Centre that evening. Well played, gentlemen.
Posted by Don Roy at 7:38 AM