Does Poor Fan Support at Home Affect a Team's Record? The Case of the Tennessee Titans

I have been a Tennessee Titans fan for about 12 years. I know, it is difficult and coming off of a 2-14 record in 2014-2015 doesn’t make it any easier. However, I’ve managed to stick out my loyalty to the team, and I greatly encourage others to do the same. No more bags over our heads or jerseys turned inside-out. Please. You think seeing more opposing fans in Nissan Stadium or hearing thousands of ‘boos’ contributes to the Titans success on the field? I think not. The empty seats in Nissan Stadium must be occupied, no more opposing fans out shining us in OUR house, and no more negative remarks. 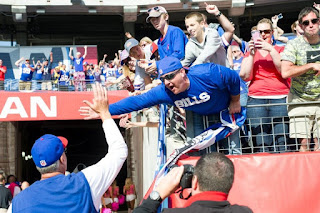 According to ESPN, the Titans turnout in the stands is ranked 19th  in the NFL- 19 out of 32? C’mon, we can do better than that. Applaud what we have done, who we are now, and where the franchise is headed. Understand that we are rebuilding and still have a lot of growing to do. These photos are from fans in Tennessee’s stadium – this just shows, it is not our house.

Attending several home games provides me with first-hand experience of dealing with obnoxious fans from opposing teams – whether it’s in front of, behind, or beside me. If I’m not happy about it, I know the players and coaching staff are not either. An article written by Tom Wood in July 2015, states, while Nissan Stadium has announced sellouts, it is obvious there is visibly declining attendance. We have 69,143 seats to fill, and they are meant for individual’s reppin’ powder blue and the sword and shield – nothing else. I am tired of the celebration being louder when the opponent scores  Steve Underwood, Titans Interim President, promised a “new look for the stadium and a new attitude from the team to lure fans back into the stands.” As a fellow Titans fan, I say we take our house back. Let’s not be a contributor of another losing season.

The Stats are There

According to NFL.com and an article written by Teresa Walker, the Titans are tied for the best time of possession, holding the ball for an average of 34 minutes per game. Also, scoring an average of 25.5 points per game is a major improvement from the previous seasons 14.3 average, which ranked second to last in the NFL. Marcus Mariota, who received NFL’s Rookie of the month for September, ranks 10th among Quarterbacks with a 99.7 passer rating. That is leaps and bounds better than our former QB’s.

The Titans lost two games early in the season by a combined 3 points. 3 POINTS. While I know fans are losing hope of being a playoff contender, that stat alone proves there is still a chance. I am confident in the Titans ability to look past the painful losses they have suffered and finish strong.

It’s on Us – Have a Little Faith
It is on the Titans fan base to help the team bounce back from a poor start. It our responsibility to energize the team – how do we do that? Make a presence. Purchasing tickets and bombarding the stadium will instill the faith and loyalty this crew needs to turn themselves around. Tennessee is still in the process of learning how to win, just be patient. Buy a ticket, show up in the rain, sit through the snow, and be louder than the person next to you. A confidence booster is as simple as being there for the team – about being a FAMILY.

Family refers to sticking up for one another and supporting each other, no matter how difficult. A world of difference can be made by the amount of effort fans put forward. Tickets can be bought on Stub Hub, Ticketmaster, Craiglistst, scalped before the game, or from friends. There is no excuse to not attend. If you are a Titans fan, be proud of it. The team is only a play or two away from sealing several victories. I encourage you to give it time and most importantly, Titan Up – It is time to be the 12th man. Go to the games. Help make a difference.