Serena vs Maria: The Fight for the Almighty Dollar 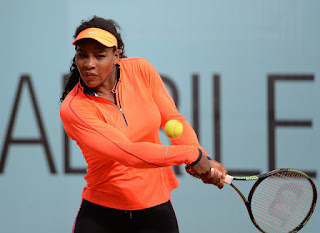 by Maurleda Washington
The Reason Serena is Number One
Let me take you back to 1999 when a 17 -year -old from Compton, California burst on to the scene winning the US Open like it was her destiny. That 17 year old was Serena Williams, arguably the greatest women’s tennis player of all time. Since 1999 Serena has reigned supreme atop the rankings of women’s tennis winning 21 grand slam titles (13 doubles titles), five time WTA champion, and one Olympic Gold medal (plus 3 gold medals in doubles). She’s been ranked as the number one player for 247 weeks during her career. Despite dominating the world of tennis she still doesn’t garner endorsement deals like Maria Sharapova.

Serena vs Maria
Serena has played Maria 20 times and has beaten her 16 times in a row, yet Sharapova earns almost twice as much as Serena does in endorsements. Maria Sharapova earned $29.7 million from 2014-15 between prize money and endorsement deals, $5 million more than Serena. Kurt Badenhausen, a writer for Forbes.com, wonders if Serena is being held back by her race, corporate bias, likeability, or beauty. Now don’t get me wrong, Serena has some top notch endorsements such as Nike (Maria Sharapova is also sponsored by Nike), Wilson, Beats by Dre, PepsiCo, Chase, and Audemars Piguet. But for what she does for the game of tennis, she deserves to be at the forefront in endorsements, not a player that can’t beat her when they go head to head. Tennis is more of a rich persons sport; people with a more affluent background. The Williams sisters brought a whole new market to tennis when they arrived on the scene. Could she be being held back by race? There’s no way that we can find concrete evidence to support this accusation, so all we can do is speculate. It was rumored that in 2014 Serena threw a match in Dubai because she didn’t want to play there because the fans were hurling racial slurs/insults her way. You can see it when she plays, she’s the clear cut favorite to win a match, but the crowd will cheer harder for her opponent than they will her.

Is Serena a Marketable Player?
Maybe companies don’t want a black person to endorse their products, this is only my opinion I can only speculate and try and figure out why the greatest women’s tennis player continues to earn less than the 3rd rank women’s tennis player in the world. Could it be that Serena’s just not likeable, people may take offense to her smashing rackets when she’s not playing up to her potential, or arguing with chair umpires or her trademark yelling of “come on” when she has her opponent right where she wants them. In a game that is more finesse than aggression, maybe here personality is too much to handle for sponsors and fans alike. In the world that we live in, beauty can sometimes get you further than your smarts. Now don’t get me wrong, Serena is attractive, but is she as attractive as Maria? Serena has a very muscular body, nice features but she’s super buff. Whereas Maria is a slender, blonde haired, white girl she’s the universal standard for what endorsers are looking for to be the face of their company. I could go back and forth on this subject all day and night the one conclusion that I hope you draw from reading this is that there is an extra burden that athletes of colors have to overcome, it’s unfair but life isn’t fair so as we sit and nit-pick on how Maria Sharapova made $5 million more dollars than Serena Williams, they both make more money than me so I think Serena will be fine.