Is Any Publicity Good Publicity? 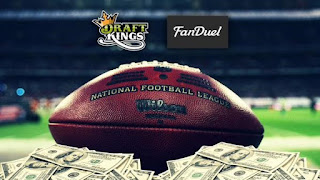 Daily fantasy sports have taken over the fantasy sports spotlight. I have been playing DraftKings for several months and have been seeing their commercials on TV for about a year. Recently, DraftKings and FanDuel amped up their advertisements, coinciding with the start to the football season. Combined, the two companies spent nearly $150 million on internet and TV in the time period coinciding with the start of the football season. Fantasy football is the most popular fantasy sport. Many people don’t play fantasy basketball, baseball, hockey, etc. because the seasons are too long to keep up with a lineup to set every day. However, football gives fans a week in between games to set lineups. Hardcore fantasy football players like myself still treat fantasy football as an all week task. Sunday is game day, along with one night game on Monday. On Tuesday, play the waiver wire then check on Wednesday to see who we were able to claim and who got released that I might want to sign. There’s a game on Thursday and Friday/Saturday are days to set your lineup. So, these websites came up with an idea to make fantasy sports a truly one-time thing with no season long commitment.


Beginning the Advertisement Overhaul
I remember first hearing the commercials and seeing people win millions of dollars and assuming it was a load of crap. However, these sites grew more and more popular and this summer I began playing daily fantasy golf. At first, I would just enter free contests until I understood the concept. Then I got bolder by entering one dollar or three dollar contests with a chance for a bigger reward. I’ve never won more than five dollars in a contest, but I was successfully drawn in as a consumer. Now that the sites have gotten more consumers and a more recognizable name, they went all out for the start of football. It seems like every commercial break has a commercial for either FanDuel or DraftKings. The funny thing is, I always watch NFL RedZone for my Sunday morning and afternoon viewings of football. RedZone has no commercials, yet I still am aware of all the commercials. That is because the commercials have been so overwhelming, I’ve heard of them through social media. I follow many sports writers and personalities on Twitter and many of them have made jokes referring to the heavy dose of commercials. Even though most of this publicity has been negative towards the sites, calling the commercials annoying or criticizing their lack of diversity, it is still publicity. I’m sure if you asked if the sites would prefer to have no criticism but with no publicity, or high publicity with high criticism, they would always take the latter.

Bad Publicity?
A big reason these criticisms don’t matter is because the main target audience is people willing to gamble money. The commercials advertise as a non-gambling site, which it isn’t to an extent. But for the most part, you are spending money with the hopes to earn more which is essentially gambling. If someone enjoys gambling or gets addicted to it, they will not care about the amount of advertisements. You don’t get annoyed out of an addiction. As long as there are fans interested in investing their money with an opportunity to gain more money, daily fantasy will stay. People are lazy and the convenience of only having a one day or week dedication will continue to garner the interest of fans. General interest in sports could increase with casual sports fans as well. Anyone can play daily fantasy sports and there will be people that don’t typically watch much sports that will take a chance at winning money. Daily fantasy is similar to the lottery in a sense, except in fantasy there is some skill mixed in with the luck of it. As long as the daily fantasy sites are gaining attention, people will be attracted to the possibility of winning. Therefore, these sites are likely just fine with the negative publicity, as long as it’s any publicity.

Jacob Young is a senior journalism major at Middle Tennessee State University.
Posted by Don Roy at 10:14 AM