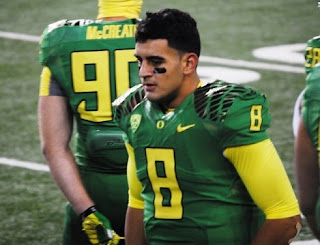 Editor's Note: This post is the first in a series over the next several weeks authored by students currently enrolled in my sports marketing class. I hope you enjoy their take on issues of the day in sports marketing. - Don Roy

Just who is Marcus Mariota?


These are also the same reasons that he is the Titan’s new marketing break to reestablish a brand image. With brand endorsements like Island Insurance Co., Beats by Dre headphones, Nike and Subway, Mariota can be a marketing game-changer.

Isn’t every kid’s weird dream to be endorsed by Subway? It means that you’re a real athlete. Mariota played for the Oregon Ducks for three years as a starting quarterback. Why didn’t he play the fourth year? Because the 21 year-old is now in the NFL. This is only after winning the Heisman Trophy as a junior in college, which then afterward, he decided to enter the draft. HOLY COW, BATMAN. This dude can barely drink legally, and now he’s the Titans starting QB? Does this lean more towards impressive or sad?

(Fun fact: Mariota is not the youngest guy to be drafted into the NFL. That honor belongs to Amobi Okoye, who played for the NFL’s Houston Texans when he was 19.) Read more interesting facts about NFL players.

There’s no doubt that Mariota is a good football player. In his Hawaiian high school career during his senior year, he led an 11-0 season. During his freshman year with the Oregon Ducks, he led a 35-17 winning season. This was followed by his sophomore streak of 11-2 season. And in his junior year, he led a 12-1 season, which then made them chosen for the Rose Bowl in 2015. It makes sense he’ll need the noise-cancelling beats to pump him up.

Mariota has got some impressive stats: Two hundred and nine passing yards and four touchdowns. A perfect 158.3 passer rating. Only three incompletions. But did you know that Mariota was the fastest quarterback in Week 1, hitting a speed of 21.42 miles per hour? Heck yeah. Linebacker Zach Brown has even said, “He is faster than I thought… He is an athletic quarterback. He didn't win the Heisman for nothing.” Long story short, JUST DO IT. 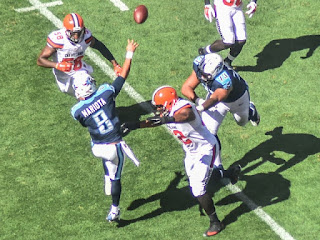 So it’s not really an endorsement deal, but come on: Mariota was racking up all these endorsements before he even signed with the Titans. This gig is the real deal. Coach Ken Whisenhunt is quoted saying, “You may not hear it in my voice, but I’m really, really excited to have this kid.”  There’s a lot of potential, we know the Titans could use some love, and they need some star power to get them out of their funk.  One of Mariota’s former coaches talked about his old player saying “if you can just bring him along and have just a little bit of patience and give him the correct direction, I think this kid can be one of the really great quarterbacks of the future in the NFL.” I think the Titans are thinking the same thing.

Marcus Mariota is from Hawaii, exotic no? Because of this, he has a unique fan base from the island that is willing to cheer him on financially. But having a last name that a lot of people mispronounce, I personally understand the frustration that comes with the territory and the desire to share with the world how to actually say it. Surprisingly, Mariota is pronounced like “MAR-ee-OH-tah,” according to ESPN’s journalist Paul Kuharsky. Apparently it’s a common mistake attributed to something called the “Marion Rule.” Read more about the common mispronunciation here.

All of these things combined make Mariota a marketing goldmine. He has all the athleticism, the endorsement sponsorship, the fan base, the youth, the credibility. What can he do for the Titans?

He can be a game changer. Mariota can (and already is) generate social media buzz, good PR, sales, and more. He’s helping change the Titans’ brand image with one new fan at a time. New is fun, and new is new—meaning new experiences for Magazine covers, new headlines, new hopeful promises, and new sales. Tennesseans everywhere are excited to see where this can lead, and they’re willing to buy a ticket to find out. Plus, wouldn’t it be great to buy updated Titans merchandise and display it proudly? Everyone likes a winning team, and everyone love to root for the underdog.

But what don’t we know about Mariota?

What We Don't Know

·         What will the future hold for Mariota?
He’s had a great first game, but a game doesn’t make a season, and a season doesn’t make a career. Is there too much hype about Mariota? Will this young kid be able to keep performing under the NFL pressure or will it be too much? Whisenhunt said “Hopefully we’ll clean up some of our mistakes…We still have a lot of things to work on.” Mariota’s endorsements could cut the cord if Mariota can’t take the pressure. After all, new is new—meaning no national/professional experience before. Mariota could fizzle out; the marketing goldmine fizzling out with him. Read more about what Coach Whisenhunt said .

Hey, his birthday is coming up, what is the guy that has everything going for him going to do for the big 2-2 in Nashvegas? Obviously I’m joking, but the NFL brings a lot of professional and social pressures. Hopefully, young Mariota will keep a good head on his shoulders and avoid bad blood with the Titans or endorsement deals. Bad publicity doesn’t work well in business partnerships.

What do you think Mariota will do?

Sydney Copp is a senior at Middle Tennessee State University. She plans to graduate in May of 2016 with a bachelor's degree in Public Relations and a double minor in Marketing and Global Studies. She enjoys watching professional football and USA Swimming. You can reach her on Twitter at @SydneyCopp.
Posted by Don Roy at 8:44 AM