Luke McCown is an NFL Quarterback who was drafted out of Louisiana Tech by the Cleveland Browns in 2004. He has since played for five different teams and only started 10 games. He is an anonymous backup whose only major in-game responsibility is to hold a clipboard. So what is he doing in a national TV commercial? McCown landed a spot as the pitchman in the following two commercials, talking about Verizon’s backup generators:


The commercials themselves are genius. They are both very funny, and McCown presents himself well. These two short TV spots made waves in the sports media world. Since the ads began running, Luke McCown has gotten more national attention than he has ever had. This also means Verizon’s message has been getting national exposure as well. Social media caught on, and comments went back and forth, both poking fun at and admiring the ads. People shared them with their friends and talked about them on radio and television shows. But no one predicted the seemingly prophetic quality they had.


In the Saints week 2 tilt against the Buccaneers, starting Quarterback Drew Brees injured his right shoulder, and was ruled out for the Saints week 3 game. This was a shocking development that no one, including Verizon, could have seen coming. Drew Brees had not missed a single start in his time with the Saints, a period which dates back ten years. I mean, what are the chances that the one time a backup QB gets a big TV commercial, he is almost immediately thrust “into the regular rotation”, due to the injury of a star who hasn’t been hurt in a decade? And what does this mean for the ad campaign? In one of the commercials, McCown states, “I bet if some of those backups got a chance, they could really shine.” Obviously, this line was intended to draw consumers’ attention to the reliability of the Verizon network. But now it seems like the destiny of Verizon’sbackup generators rides on the success of the backup Quarterback. As Dan Hanzus of NFL Media Group tweeted on September 25:

“The fate of the Verizon Empire rides on the 34-year-old right arm of The Other McCown (Luke) on Sunday.”

“Time to Shine”. With this picture from the commercial… 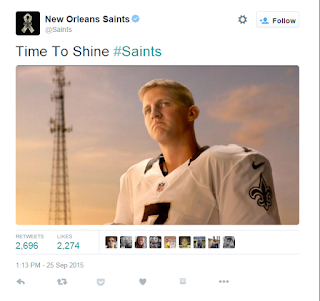 These off-hand comments were meant to be humorous, but they held some truth for Verizon. If McCown were to be a disaster on the field, on some level that would discredit the message of theadvertisements. At the very least, Verizon would have to start over with a new athlete, or, more likely, an entirely new commercial premise.

He was not a disaster, however. The Saints lost to the Carolina Panthers 27-22, but McCown played well. He completed 82% of his passes for over 300 yards, and had his team is a position to take the lead late in the fourth quarter, before Josh Norman of the Panthers made an incredible game clinching interception. So Verizon does not have to burn its “Backup Generators” campaign to the ground just yet, and with Drew Brees returning after missing just one game, the pressure is once again off “The Other McCown” and the backup generators.

What effect do you think McCown playing has on the “Backup Generators” ad campaign? Post your thoughts and comments below.

Sam Lewis is a business administration major at Middle Tennessee State University and will be graduating in December. He has had a life-long passion for sports, and  hopes to convert that passion into a career in the sports industry. His long-term goal is to work in the player operations department of a professional sports organization.
Posted by Don Roy at 8:39 AM