The Life of a Displaced Sports Fan 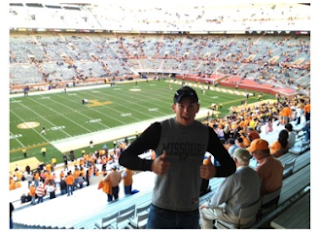 Watching sports and being a sports fan is something that typically doesn’t require much effort. Most people are fans of their respective teams or athletes because of geographic location. If you grow up in Wisconsin you’re going to be a Packers fan, in Tennessee you’re likely a Titans and/or Volunteers fan. Because of this situation, it makes it very easy to market to those in-state or regional consumers. Merchandise and apparel will be readily available at all sports and specialty shops and even at the local Walmart. But what happens when you are a fan living in foreign territory?


That is the predicament I have been in for the last six years. Born and raised in rural Missouri, I became a fan of Mizzou Athletics, the Kansas City Royals, and the Kansas City Chiefs. However, I decided to ditch the Chiefs and follow the Dallas Cowboys once I was old enough to have a say in the matter, probably because of the dynasty in the 90s. During that time it was a given that I would be able to watch those teams play on television. I could buy merchandise and get information about those Missouri teams. The sports segment on the local news always covered what I was interested in, I was able to attend games, and almost every retailer that carried sports merchandise had what I wanted. That’s the way it is for most people, and in a perfect world, everyone would be in that situation.

That all changed when I graduated from high school and enlisted in the Army. No longer was it the case that everyone around me cheered for the same teams, or even sports for that matter. I was now living in upstate New York with people from all over the country. I wasn’t able to watch Missouri football or basketball games, or Royals baseball without some hassle and a definite effort involved. I had to order gear and apparel to be delivered to the local chain stores, because they didn’t stock them. It was very difficult and oftentimes frustrating to be a fan and keep up with my teams. I used websites and mobile apps to read articles and review stats, trying to stay connected as best I could. Things did get a little easier when I came to Tennessee in 2011. Now only living one state away and Missouri joining the Southeastern Conference in 2012, I have more access to Mizzou athletics and games. On the flip side, almost everyone here seems to be a Volunteers fan. There is more media coverage with the SEC Network, but nothing beats being an in-state fan.


So what should marketers do differently? Is it reasonable to expect to have constant coverage and access to your favorite teams, no matter where you are? No matter how many networks or reporters there are, the experience will never be the same as if you were local. It would detract from one of the things that makes sports so special—having pride in your team and where you’re from. Sure, every sports store could be exactly the same and carry merchandise and apparel from all schools, teams, and sports. That wouldn’t be very personal, though. However, I think things are moving in the right direction. Local stores should carry mostly all local teams. That’s where the majority of their sales are coming from. They should also be willing to order and have shipped in merchandise from other teams for the select few who want it.

While it isn’t always easy to get the things you want, or watch the games you want, that’s just part of being a displaced fan. You take pride in where you’re from and who you cheer for. You’re ok with ordering all of your merchandise online, searching for a place to watch your games, and not fitting in with all those around you. You’re ok with it because you’re loyal and it doesn’t matter where you are, you’ll make it work…especially when your teams beat the others around you.

Chris Troxell is a senior at Middle Tennessee State University studying Animal Science and veteran of Operation Enduring Freedom.
Posted by Don Roy at 6:00 AM