Why Is the Student Section Empty? 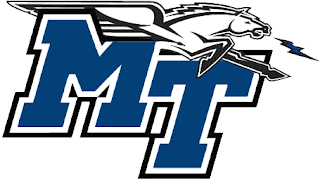 Middle Tennessee State University, is an NCAA Division I FCS school located about 30 miles outside of Nashville in Murfreesboro, Tennessee. The MTSU Blue Raiders are members of Conference USA and have decent sports programs. However, their fan base is not so decent.

Where Are All the Fans?

This is my fourth year in the Band of Blue, and I have never seen a sold out game at Floyd Stadium. There are even some games when we wonder where the student section is. MTSU started out great this season and may have hit a road bump but revived themselves with a 3-overtime win over a then 8-1 Marshall team. I wonder why people were not there to watch MTSU (who was favored to win) beat an 8-1 team. Attendance for the opening home game this year was around 16,000 people. The stadium holds around 30,000.

The low attendance raises questions such as:


What's It Going to Cost Me?

The cost to get into any MTSU athletic event for a student is free. Student guest tickets are sold for around $8, general admission tickets are around $15 and reserved seating is anywhere from $25 to $40. That’s not bad for a Division I school. Although there were other teams playing, scores of other games are shown on the scoreboard throughout the game. Spring break trips are given away, free hot dog vouchers have been given out, and Blue Zoo t-shirts have been given out. What else does the marketing team for athletics have to do? They even raffled off a flat screen TV! College kids love free stuff yet there were only 25 students in the Blue Zoo (MTSU’s student section) for the game against Florida International University. Next to the student section is the Band of Blue, which has around 325 members every year. 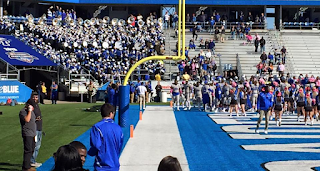 Is the Team Even Good?

MTSU ended the regular season 7-5 and earned a berth in the Popeyes Bahamas Bowl. The second game of the season against Alabama was kind of a long shot but the Blue Raiders showed the Tide they weren't going to go down without a fight. They also put up a good fight when Vandy came to Murfreesboro and suffered a close lose when they played at Illinois.

In my opinion the marketing department has outdone themselves this year trying to get people to the games. It is now up to the MTSU student body, faculty and the Murfreesboro to come out and support their Blue Raiders at home games.

Victoria Shillingsford is a senior at Middle Tennessee State University. She is graduating in May 2016 with a bachelor's degree in Media and Entertainment and a minor in Marketing. She enjoys watching The University of Notre Dame, Philadelphia Eagles and college basketball. You can reach her on Twitter at @_1ging.